Women, The Guardian of Earth 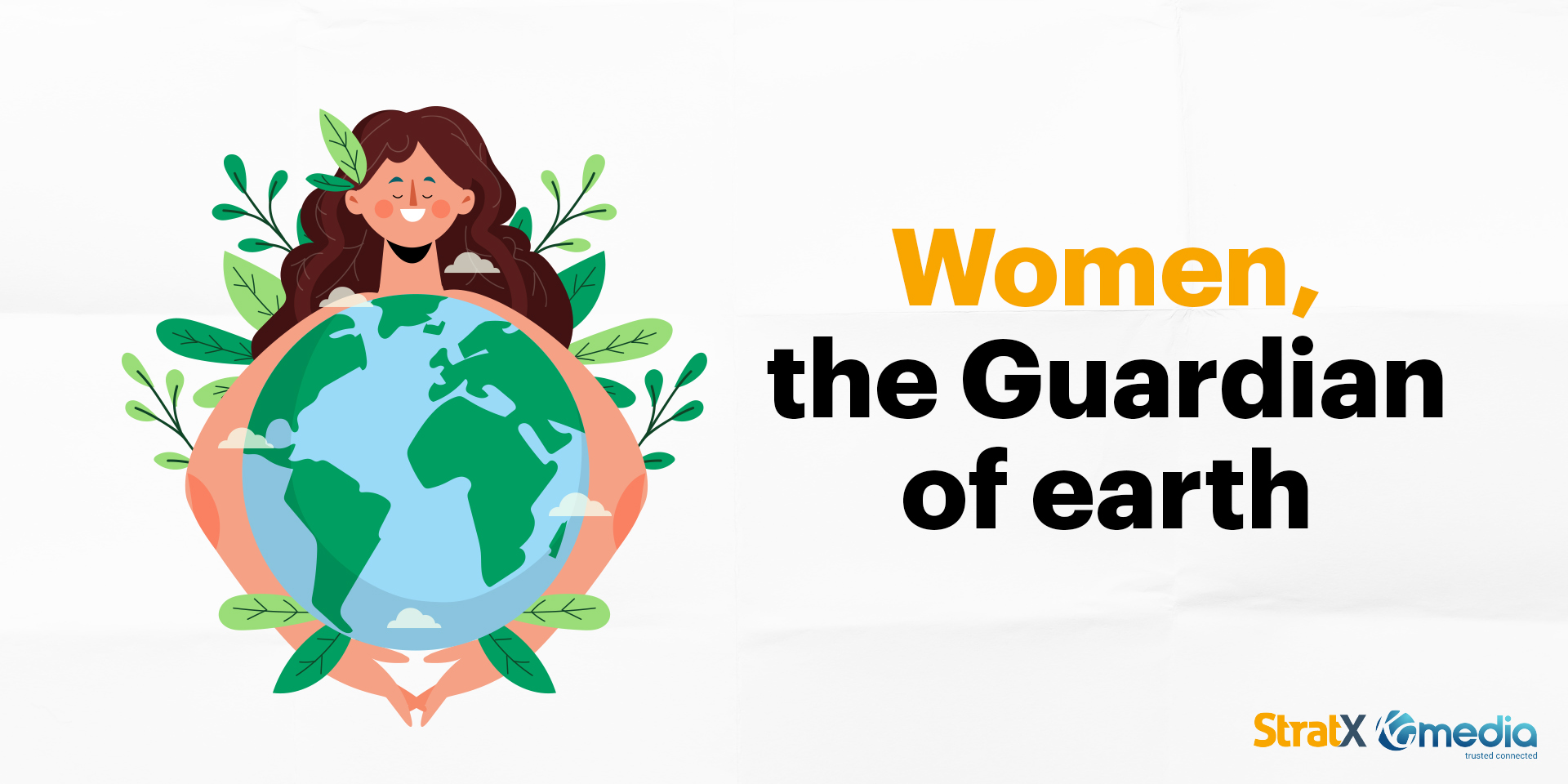 Talking about gender equality in a country with a strong patriarchal system is an interesting discussion. As in Indonesia, where the role of men is seen to be more prominent, while the role of women is made only to support the role of men. Agree or disagree with this, the facts say so.

However, the spirit of women to be equal to men has never been extinguished. This spirit is getting bigger and bigger ahead of Kartini Day. The challenge is that this spirit must not slacken if Kartini Day has passed. Indonesian people, especially women, should know the essence of Kartini Day, or at least – knew what spirit Kartini fought for.

In various literatures, it is stated that the spirit or struggle of Ibu Kartini is not only echoed nowadays. Beautiful fights with kebaya, lively in the kitchen, and so on – Ibu Kartini’s struggle despite all these things. With the various efforts she has made, Ibu Kartini is fighting for women in Indonesia to have the same education and knowledge as others. Thus, they are no longer underestimated, no longer excluded, and Indonesian women can stand on their own in all their endeavors.

In this modern era, many female figures have emerged as independent women for many things. One of them is those who care so much about the environment and nature preservation. The relationship between women and the environment for this year is so close because the moment of Kartini Day and Earth Day go hand in hand. So, the idea to make a celebration of Kartini Day and Earth Day can be made together. In fact, from this idea too, we can all know how the role of women as human beings who participate in preserving nature.

This background or concern that makes StratX KG Media conduct a study with an online survey and get 365 respondents and all of them are women. In this study, we found various interesting insights that can be the basis for brands – especiall brands that have a female target audience – to build sharp communication strategies.

To find out more, please see the report below. The interesting thing about this respondent’s profile is the level of education, where the majority are SMA/MA equivalent as much as 50,00%, then followed by D4/S1 as much as 31,59%, and S2 as much as 4,40%. Related to the spirit of Ibu Kartini, in reality there are still many women who need higher education. This point can be a record for a brand with an educational persona, it can spread up that education for women is an important thing.

Where the earth is stepped on, there the sky is upheld – this proverb is quite related to what will be discussed in depth here. Not only men who take part in preserving the environment, with the spirit of Ibu Kartini – women can also have the same role as men to protect the environment.

The next question is how deep their level of concern is and what they have done to help protect the environment.

Women Care for the Environment 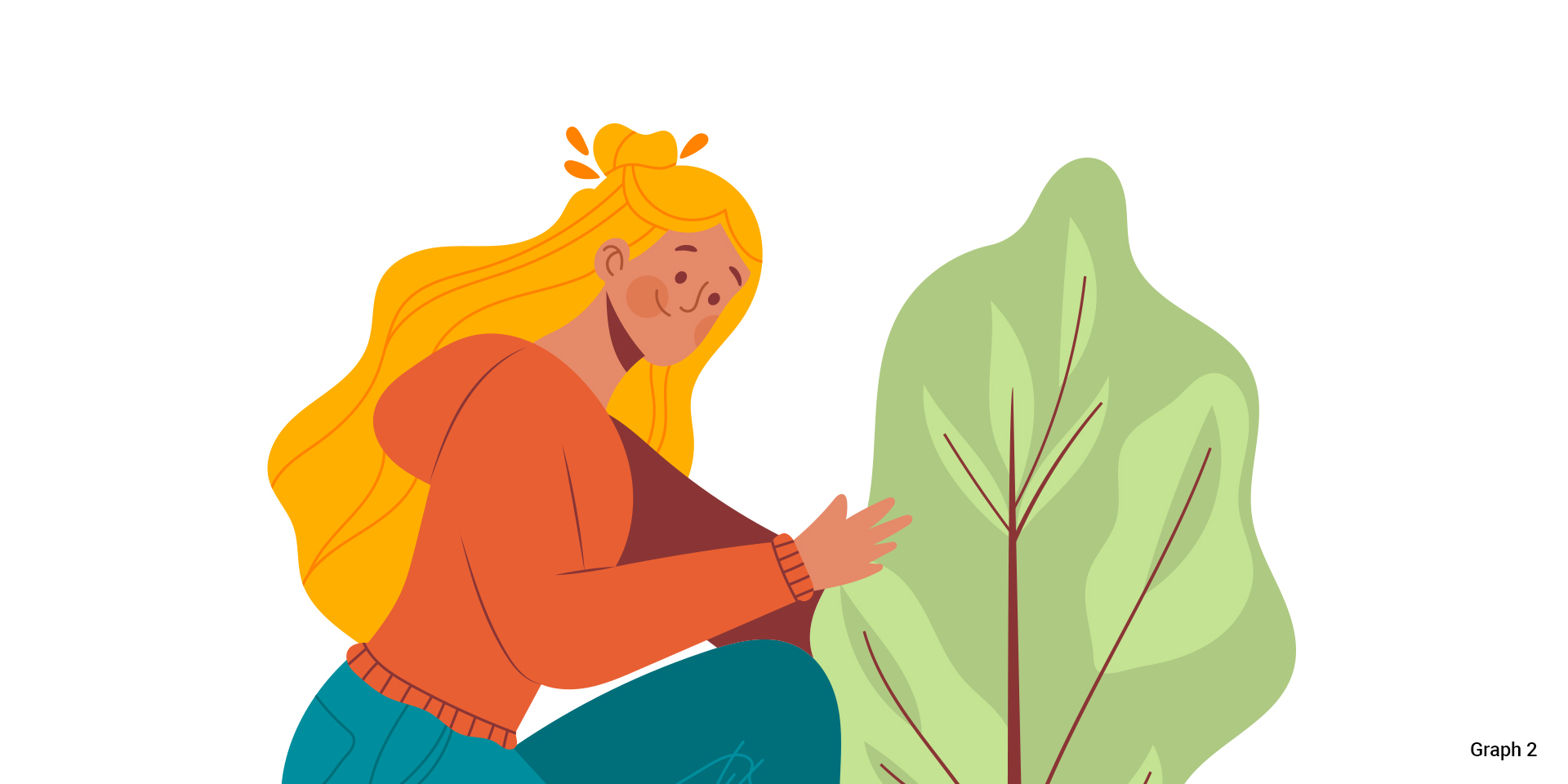 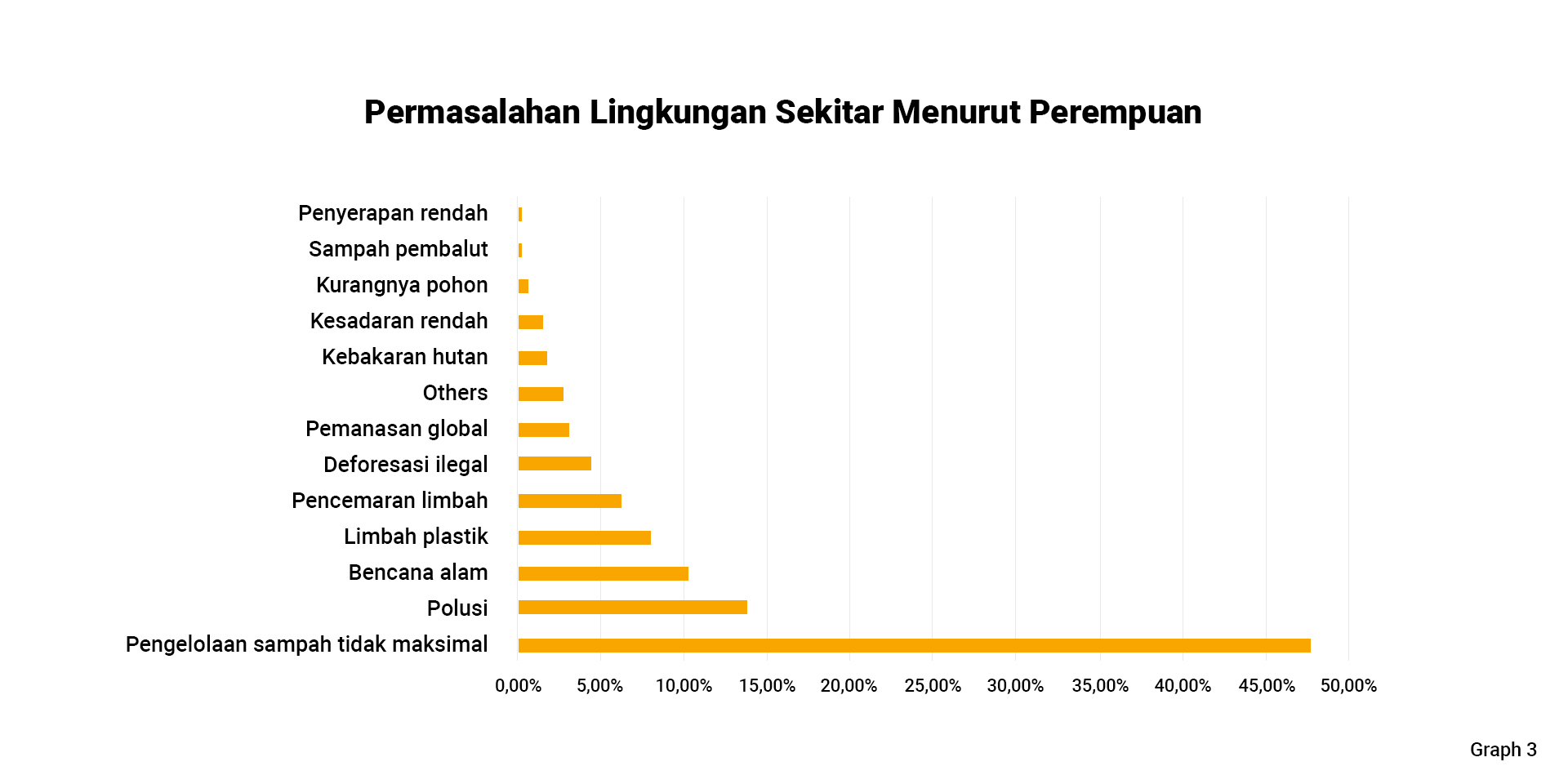 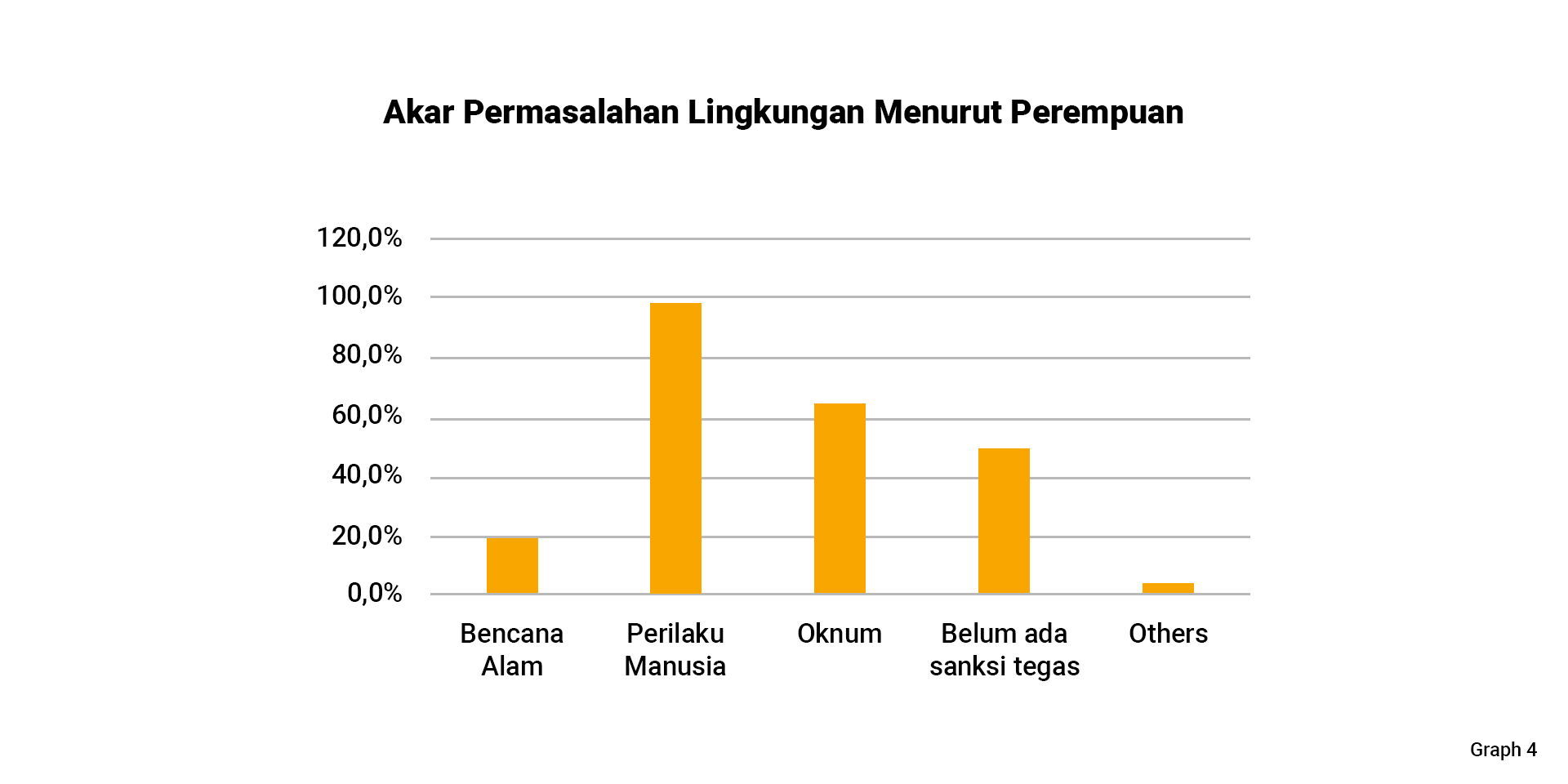 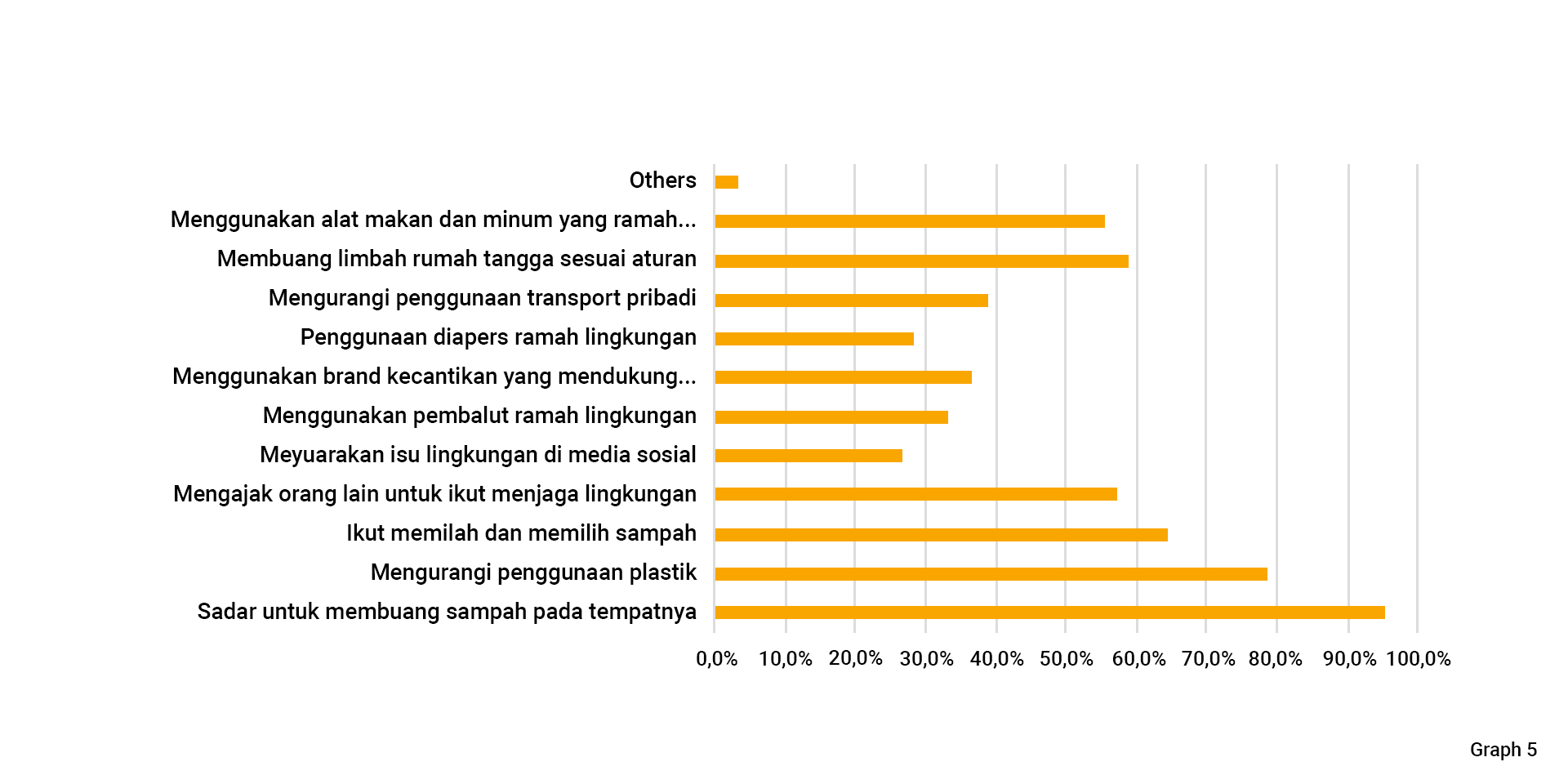 The interesting thing about the actions they take as an effort to save the surrounding environment is the willingness to tell others via social media that environmental issues are important things to be resolved together. This point is quite interesting to be interpreted as the awareness of women to share content with the theme of environmental issues or even they want to create content that shows their concern and what their action are through social media. 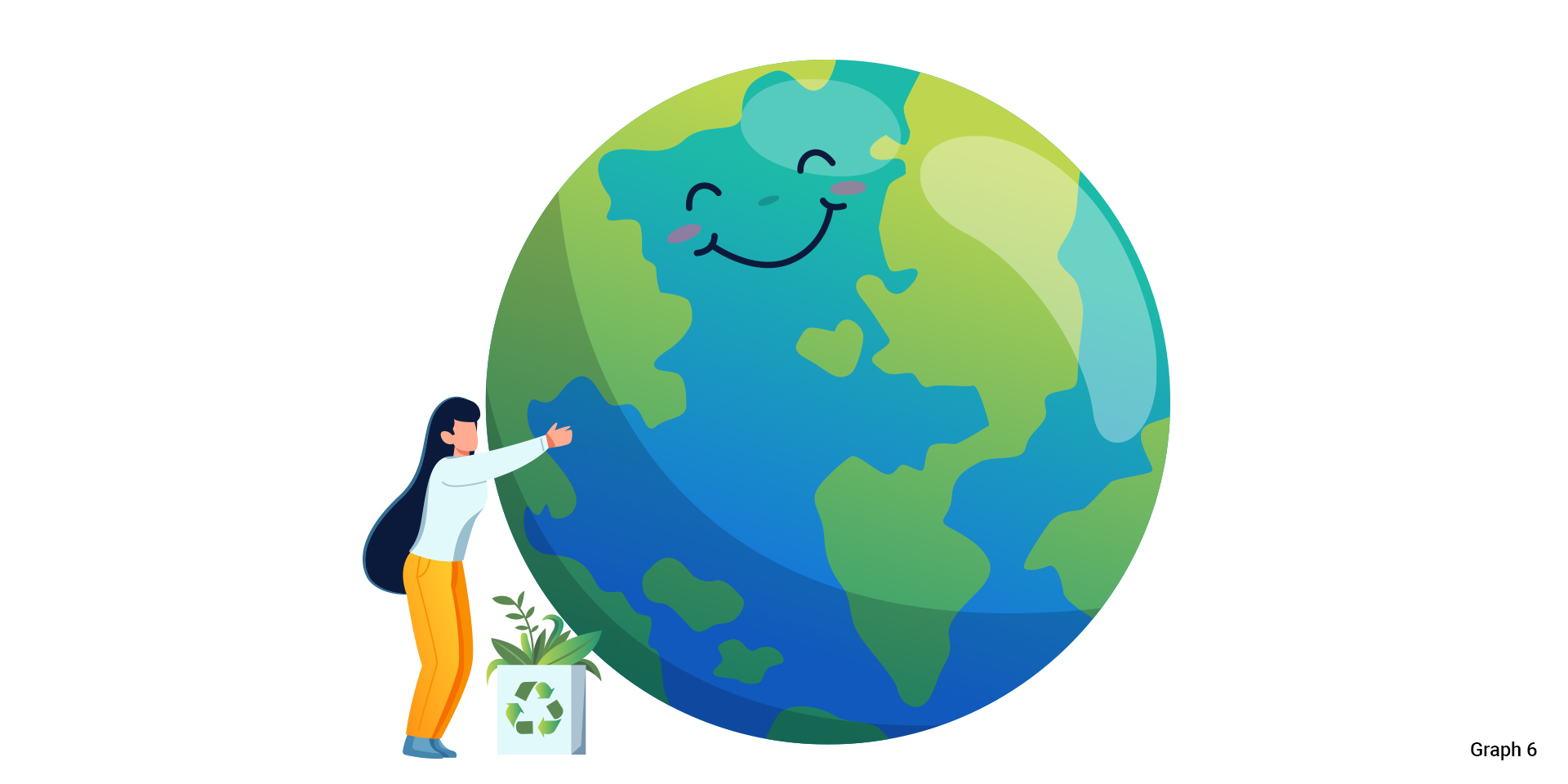 Women’s awareness of environmental issues seems to start from the massive information circulating on social media. This information can be in the form of many things, one of which is a digital communication campaign. 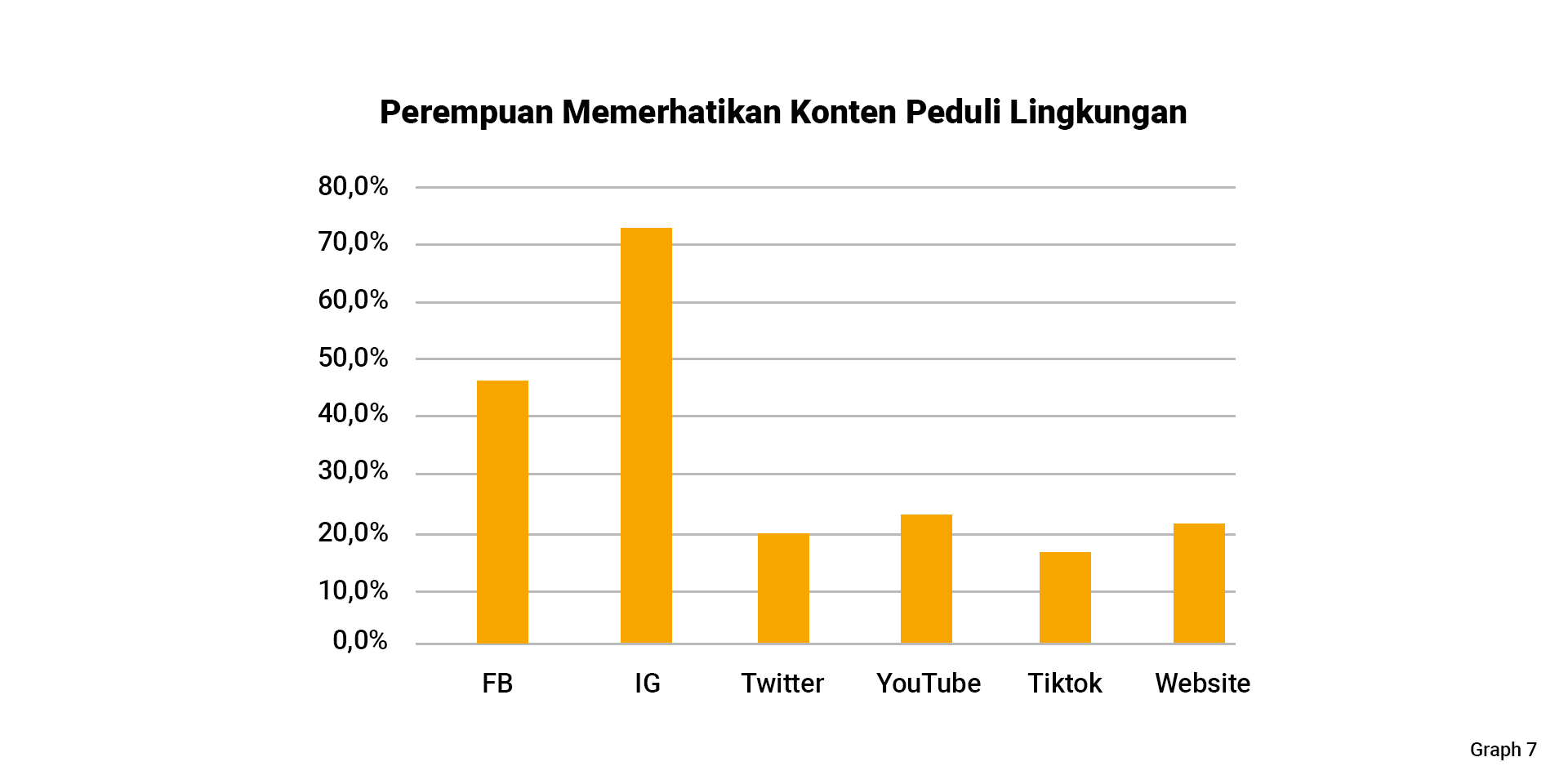 From the eyes, down to the heart – this proverb is quite related to what StratX KG Media found in this study, where the majority of respondents wanted real action, going directly to the community regarding this environmental issue. The second thing they want is socialization about environmental care offline and online then followed by action to produce environmental friendly products.

Discussing about digital communication campaigns or real actions taken by brands or other parties related to environmental issues, of course there are figures who are used as examples by respondents. Various names of public figures are mentioned in this study such as Nadine Chandrawinata, Dian Sastro, and what is interesting and surprising is that Susi Pudjiastuti is a figure who is very close related to environmental issues.

Seeing the respondents’ attention to digital campaign on environmental issues to the figures they associate with this issue – they have expressed various hopes. The majority of respondents expressed great hope for the community to understand the importance of preserving the environment. The second hope is their great desire for the government and brands to work together in solving various kinds of environmental problems, and third – the use of technology as an effort to preserve the environment.

Kartini Day and Earth Day which go hand in hand are interesting moments to celebrate. However, to win the hearts of the target audience, brands need to know what the spirit of the two big days is. Talking about equality, maybe many brands have talked about this from various things – but to talk about the equal role of protecting environment, this can be a new communication umbrella for brands to follow up in the future.

So, What Brands Can Do?

Seeing the various interesting findings from this study, there are many strategic steps that brands can take as an effort to win the hearts of consumers or their target audience.

Like digital communication campaigns, this step can still be done but maybe only as a support for the real action that the brand must take. Seeing that the pandemic situation is getting better day by day, real actions from brands with various health protocols that are still being adhered to – can be done directly. The real action of the brand should be the main star.

The real action of the brand can be divided into several parts. Not only live activation – but brands can also depart from the products offered. By utilizing existing technology, brands can make products that are truly environmentally friendly, and can even have a good impact on the environment. These messages or values can be helped by digital campaigns and public figures who are closely related to environmental issues.

That way, it is hoped that the real action of the brand can increase public awareness about the importance of preserving the environment. Indirectly, the brand also gets a persona as a person who helps this important issue.

However, before the brand begins to process all the insights or recommendations that have been given above, one important fundamental is the spirit of participate in preserving the environment itself. With this spirit, every step taken by the brand, whatever it is – can be understood by the consumers or their target audience as a positive effort for the environment. That way, the brand can win the hearts of consumers.